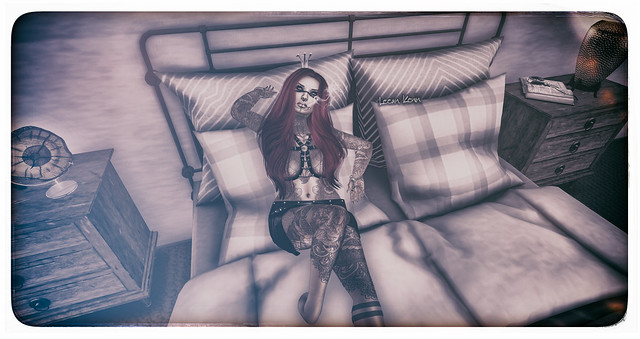 END_OF_DOCUMENT_TOKEN_TO_BE_REPLACED

Hello! I’m back after a short hiatus due to many, many things. My work schedule means it’s very difficult for me to blog as frequently as I once did but I will try to find a routine. 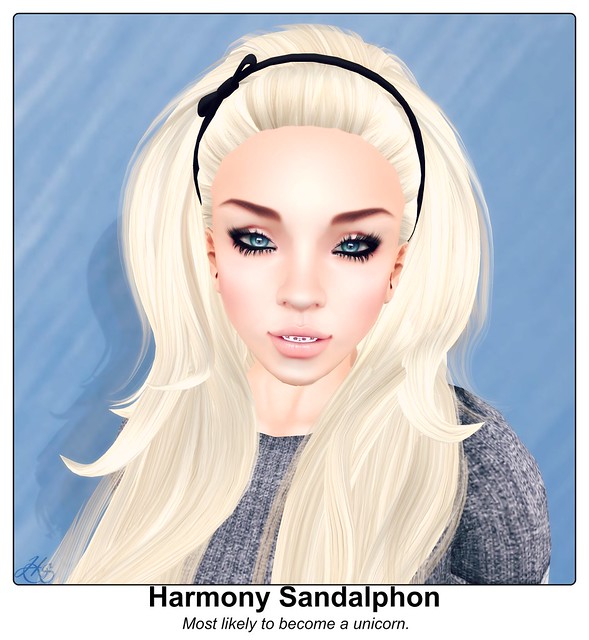 I was so excited to see Miss Strawberry Singh had restarted her weekly blog challenges and I loved setting up this photo to participate in the Yearbook Smile Challenge!

Smiling in Second Life really does look awkward for the most part. You end up with squinting eyes, eyelashes on your cheek bones and all sorts. I do have a few tricks to make this look better!
For a quick photo fix, I use Snow Rabbit‘s eyelash and teeth set. It comes with an awesome HUD for fitting the lashes which lets you position them specifically for smiling and they will move with the smile when you use the accompanying expression HUD!

“The wind stirred her russet hair, crooning softly in ears.  She stood silently looking out into the great sallow distances of sea bottom, as if recalling something, her yellow eyes soft and moist, “Drink to my only with thine eyes, and I will pledge with mine,” she sang, softly, quietly, slowly.  “Or leave a kiss within the cup, and I’ll not ask for wine.”  She hummed now, moving her hands in the wind ever so lightly, her eyes shut.  She finished the song.”
Ray Bradbury – The Martian Chronicles – Ylla
Hours and days later Ylla watched her husband head out for a hunting trip, as he called it, wearing his Battle Mask and carrying his gun.  Time slowed for Ylla as she began to fret and fuss about the house, keeping herself busy with the menial duties of tending to their home, yet all the while, the song she couldn’t place with strange words and a haunting melody kept playing in her head.  In the distance, two shots rang out, clear as a bell to Ylla’s ears, making her quiver and shake.  She looked to the sky and wondered if her dream had been a reality, and that a man from somewhere else had indeed landed on their soil.  Would her husband?  Could he?  Was he really so frightened, by just a dream?  It was after all, a dream was it not?  She didn’t know how much time had passed when she heard his foots on the porch.  Her hand flew to her throat as he opened the door, unsure of what she was to see.  His mask remained, “…hammered from silver metal, expressionless, the mask that he always wore when he wished to hide his feelings, the mask that curved and hollowed exquisitely to his thin cheeks and chin and brow.”  Ylla stepped to her husband and slipped the mask from his face, holding it in her hand as if inspecting it.  Turning the cold metal over in her hands she wondered more about the shots that had rang out in the dark.

Could donning this simple mask make her husband into a man she didn’t know?  Eyes to the sky, the haunting melody playing itself out in her head as she thought of the black haired, blue eyed stranger from her dreams.  Was there another world beyond theirs?  More than one?  Was every star that dotted her horizon a place full of mystery and wonder with creatures similar to Martians but inherently different?  Had she somehow connected with these beings for a moment; and that they shared this melody?  But as she stood there she realized she could no longer remember and she began to cry.
“Why are you crying? He asked.
I don’t know, I don’t know, but I can’t help it!  I’m sad and I don’t know why, I cry and I don’t know why, but I’m crying. Her head was in her hands; her shoulders moved again and again.
You’ll be alright tomorrow, he said.
She did not look up at him; she looked only at the empty (sea) and the very bright stars coming out now on the black sky, and far away there was a sound of wind rising and canal waters stirring cold in the long canals.  She shut her eyes trembling.
Yes, she said, I’ll be all right tomorrow.”
Ray Bradbury – The Martian Chronicles – Ylla