Fire.
My favorite element.
I’m a Geek and if there is a Spellcaster in the game I’m playing,
I will choose Fire as my element time and time again.
It’s powerful — leaving only traces of it’s target.
It’s final.
Permanent.
There is no going back.
An article written by the Smithsonian last year states that
84% of all Wildfires are started by us.
Humans.
Not machinery or something faulty.
Us.
My son can attest to this fact when he passed by a public
ashtray a few weeks ago and witnessed a fire starting
due to someone not putting out their cigarette.
Thank goodness he was there.
I would have been devastated to know my favorite Korean Market
had gone up in flames.
There are fires, however, that put the positive in motion.
Besides, being essential for cooking, heat and all it’s other obvious uses,
fire mesmerizes and magnetizes.
Stone’s Works‘ Wizard Flame Hat has the same affect.

I don’t want to set the world on fire.
I just want to start a flame in your heart.
In my heart I have but one desire.
And that one is you, no other will do.

The beginning lyrics to one of my favorite classic tunes.

I Don’t Want to Set the World on Fire by The Ink Spots
reminds me of Stone’s tribute to Spellcasters since
this hat doesn’t find it necessary to be grandiose in size
nor shout with loud colors or patterns.
We Spellcasters never want our opponent to see us coming.
Subtlety is necessary as we charge up a fireball to take them out.
Raisin colored, wrapped in a silky band and finished off with
a buckled flickering flame, the Wizard Flame Hat gives the
jump on the opposition.

It’s fascinating.
At least for me.
The “it” being how occasionally the images I create reflect
my state of being unintentionally.
It started several years back when I dreamt I was being
coddled by thorny vines.
The dream was so strong that I tried to recreate it in a Second Life image.
I did well.
Perhaps, I’ll show it to you one day.
With that said, what does the image above say to you?
Yes.
Me, too.
But, again, it wasn’t intentional.
I had resigned myself to the possibility of having to end
a very important SL relationship.
So, here I am…
kneeling before a headstone and mourning a possible
death while wearing Dark & White Store‘s Vampire Outfit.

Vampire is a Maitreya Dress complete with Unrigged Scarf
and Hat — both with resizer scripts.
Just in time for the chilly nights ahead, this dark, yet eloquent combo
is at this October’s DAZZLE Event.
Hip hugging with a squared neckline, this ensemble will surely
entice the dead from their graves.

As far as my very important SL relationship?
Well, let’s just say I may be needing a brighter bouquet some day soon….

A very sad word,
If is.
It’s sometimes filled with regret…
If only I’d been a better daughter.
If only she would smile at me.
If he only knew…
A very sad word, indeed.

I’ve been rather melancholy as of late and If has cropped up
many times during my journeys down memory lane.
I dismiss the negative aspects of them immediately
since there is no use in regretting the past.
Saying that I have learned from them
is all well and good, but I sometimes feel we use that excuse
as an aid to dulling the pain.
The trick is finding your own way of reversing those Ifs, turning them
completely on their sides —
working them.
using them.
getting in touch with them.

I’ve discovered that one way for me to work my Ifs is
via Second Life Photography.
I’m not a great photographer, but when you are expressing
yourself, you really don’t have to be, do you?

I love texture which is why my images seem to have
more edge to them.
I also love color which I’ve said many times before.
Color & Texture.
There is only one solution…
ZIBSKA!
Zibska gives me so many choices, so I am never ever bored.
For this posting I chose current sales event and
Mainstore items.

Aziza is a powerful makeup collection available now at ULTRA.
Until October 10th, you have the opportunity to transform
your mundane into gorgeous insane with Aziza’s three part system.
Her Eyemakeup palette (15 colors), Lipstick (21 colors)
and Blush (9 colors) all come with Appliers for
Lelutka, LAQ, Catwa and Omega, as well as Tattoo layers.
She satisfies my hunger for color, Aziza does.
Now, for that texture….

Becky.
You probably know or knew someone called that.
But chances are she never showcased such movement as Zibska’s
hat of the same name.
With orbits that give the illusion of hat pieces breaking away,
Becky is not just a hat, but a work of art!
I am one hat-lover in heaven and if you’d like to join me,
the Mainstore is only a click away.

Color and Texture.
I’m ready to go!
Now, If only I could wear two heads to showcase all of this on…. 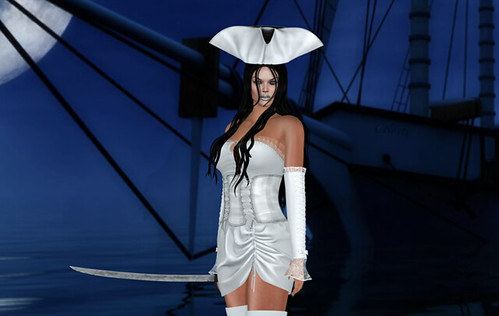 Be Happy in sl's Blog